Marmageddon – it’s just about the last non-issue headline maker that is leading me to not give one fine little wit about watching the NZ nightly news or reading the newspapers here anymore. 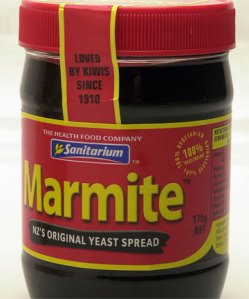 Seriously, I know I won’t be able to get through this entire post without a giggle or two (truth be told, my eyes are rolling already).

If you haven’t heard about the eventual, or supposed, or might-happen-but-might-not-happen shortage of the salty toast spread Marmite, then you haven’t missed much. Apparently the big news is that the manufacturing of the popular breakfast spread is being halted because of earthquake damage to Sanitarium’s Christchurch plant – the only plant where Marmite is made in NZ.

The spin doctors have been busy spinning. And I, for one, am dizzy. There has even been a call put out to the public asking people not to freak out if their local grocery stores run out of the brown gooey stuff before more can be made.

Really, who would freak out over this?

We’re not talking oxygen here. Or gasoline. Or even bread or milk. We’re talking about a breakfast food that some people love and others can’t even stand to get a whiff of.

Let’s assess what’s important in life (first world problems, anyone?) and what’s not.

New Zealand journalists, please cover some REAL stories in the coming days. Maybe we can come up with a strawberry jam cover up. Or a peanut butter bandit. The revenge of Vegemite.

Something other than Marmite, please…oh, and Sonny Bill.

I’ve seen enough of him lately, too.