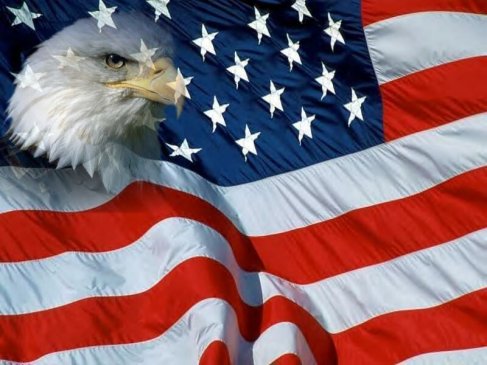 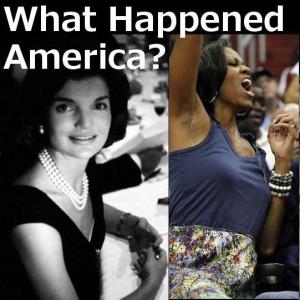 This photo showed up on my Facebook timeline the other day, and for the first time in a long time I physically shook my head and rolled my eyes in contempt at my computer screen. After gathering myself and deciding against a mini-social media tirade/melt-down, I took a deep breath and contemplated the stupidity of the implications contained within it. And then sat on all of the things I wanted to say for a week.

On the left, sits a demure and silent Jackie Kennedy. Pristine and smiling, but hard as nails underneath. All the while, unable to show her strength outwardly for the sake of propriety. And then, on the right, we have Michelle Obama – passionate, confident, and animated. A woman unashamed of her beliefs, her passion and her pure physicality. All politics aside, I know which kind of woman I was brought up to be, and it wasn’t the one who would sit back and take everything on the chin while portraying an image of physical and emotional perfection. No, I personally am much more Obama than I am Kennedy.

And there’s one reason for that. One big reason filled to the brim with millions of tiny implications wrapped inside it. That thing that happened to America and happened to me is the very same thing that has had women striving for equality in the workplace and at home for the last four decades. It’s the driving force between having a choice and a voice – or not.

That thing is progress.

I feel for Jackie Kennedy in a way. She was a prisoner of not only the times she was living in, but of the strong men around her. Her husband’s ambition and his infidelities were more important than having a public voice. She was a strong woman for sure, she didn’t bend nor buckle under intense scrutiny or pressure. But, by the same token, she did not lead 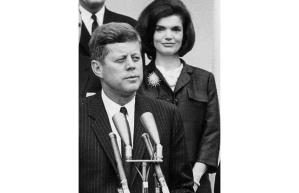 from the front (in fact she often stood in the background). Nor did she ever speak up against a man who did her wrong over and over and over again. Jackie Kennedy was known for her flawless body and her fashion sense. She was a mother and a wife – and she filled those roles in the way that she was mandated to. Quietly, full of grace and dignity, and seemingly unsuffering.

None of this makes Jackie Kennedy less of a person – but when put beside Michelle Obama, she seems almost meek. Obama is not only a strong woman physically, she leads by example and isn’t afraid to speak her mind and come up with new ideas and initiatives to drive herself and her own goals. In images, she is often seen beside (or even ahead of) her husband. She is his equal.

This, my friends, is the picture of progress.

Passion, intelligence, and having a voice apart from her hubby is something I really admire in Michelle Obama. One thing’s for certain, when I see her I truly believe she wouldn’t stand for such public instances of scorn and dalliance by her hubby…even if he is the current POTUS. Not since Eleanor Roosevelt has a First Lady shown who she is so openly.

Hilary Clinton is another strong First Lady – but she, too, is another woman who has hidden her passions and humor at the expense of her political ambitions. Her ambitions have always been big, strong and have matched her husband’s in a political sense. Yet, as a woman even Hilary is ridiculed and made to deal with the public scorn for her husband’s inability to keep his member in his pants. There’s still a long way we have to go to stop blaming women for the actions of their men. 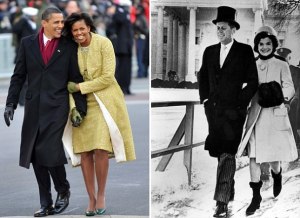 So when people ask what happened to America in comparing these two First Ladies? Progress, people.