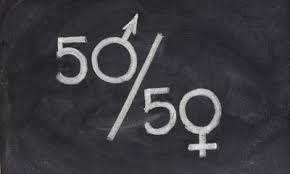 No, let me re-phrase. I’m REALLY pissed off. At myself, for thinking that the gender equality my Mom and her generation fought for was a reality -and, for not fighting harder to perpetuate and continue their fight. At the people who continue to try to make me feel less of a human for lacking one thing (a penis). And, at the patriarchal societal standards which promote old boys clubs as the place to speak openly, and to get ahead in life and relationships.

Yep, I’m angry. And for the first time in a long time, I’m ready to get the gloves out and start fighting back.

At 33-years-old, I’m a mother of a daughter old enough to notice that boys and men get special treatment and hands-up on life simply because of their gender. She’s starting to ask about my journey in life – and someday I’d like for her to look back and know to that the fight for gender equality is a worthwhile one to engage in.

Girls, it seems, continue to have to scrap and work harder for the same or similar opportunities as their male counterparts. It’s taken years of pretending sexism didn’t exist in the western world anymore, to get me to where I am now. A “last straw” moment happened yesterday for me, and I’m pissed off enough now to finally stand up and fight back. Because, I never want my daughter to feel the sting of hurt that I did. The feeling of being left out of a professional gathering because she’s “just a girl”.

In New Zealand, especially, the gender gap is bigger than the one that I experienced growing up in California. It’s visible in homes, at parties and gatherings, and in the workplace. I’m always amazed at how women and men automatically split into gender groups when families gather at BBQs and other celebrations. I enjoy the company of both men and women, and this divide annoys me to no end. It’s the polar opposite of what I grew up with. A mixing of men and women, adults and children – and a sense of girls being as worthy as the boys.

The last thing I want for my daughter is to grow up thinking that she needs to sit in a corner opposite to men and not to interact. This way of thinking and acting is old, out-dated, and needs to stop.

At present, I work for a company that is dedicated to ensuring women have an equal voice in leadership as men. Still, words are just words until people (especially men in management) take note of their actions and change them to ensure equality is more than just an idea or a pipe-dream. Changing how they act and interact at work isn’t enough – they need to believe in equality. And they need to practice it at home.

So what do we need to change these age-old “men first” standards? First and foremost, men need to stand up and take heed – and action. It’s hard for me to want to be friends with, or to even trust, men who say the right things but who don’t back up their words with action. I think I am one hell of a loyal friend and colleague, and I expect to be treated the same way I’d treat anyone else. But when male friends and colleagues perpetuate sexism by not pointing it out and continuing engage in it, it solidifies and gets harder to crack.

Stand up, men. Show us, don’t tell us, you believe in equality. If you stand by and watch it continue, you’re part of the problem. Not the solution.

We also need women to speak up. We need to be proud of who we are, of what we work for, and of being with men who believe in feminism. Because, feminism isn’t a bad word. The negative connotations associated with the premise of gender equality are man-made, and strengthened by women. Ladies, think about how you want your daughters’ lives to be. Will our struggle be their struggle? Most likely. I never want my little girl to have to fight for pay equality, for the right to sit at the table as a leader, or to even share a congratulatory beer at the bar with colleagues. But, I know she will have to fight.

It’s up to me to teach her not to back down. And it’s up to mothers and fathers of sons to teach their boys the same.

So yeah, I’m pissed off.

And, I’ll continue to smile as I fight.

Because, this fight is worth it.